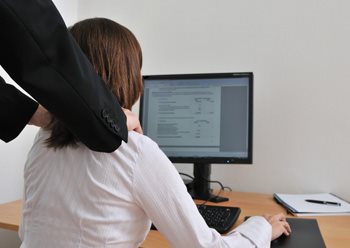 What is Sexual Harassment?• Sexual harassment refers to the intimidation, bullying, or coercion of a sexual nature. Sexual harassment also refers to any unwelcoming or inappropriate interaction (with a sexual undertone) or promise of rewards in exchange for a sexual act. In the majority of contexts or circumstances (most notably employment relations) the act of sexual harassment is illegal.

• The act of sexual harassment includes a wide range of behavioral factors from seemingly mild or harmless transgressions and annoyances to physical sexual abuse or assault. In regards to employment, sexual harassment is a common form of illegal employment discrimination in the majority of countries, and is labeled as a form of sexual and psychological abuse.

• Sexual harassment carries legal consequences as well severe emotional after effects for the victim. As a result of these negative externalities, many businesses have developed programs and training courses to prevent sexual harassment from occurring in an office setting. Not only does the act impede individuals from fulfilling their intended roles, but it also segregates victims and precipitates feelings of dismay, loneliness, and insecurity.

Types of Sexual Harassments
• Quid Pro Quo- A form of sexual harassment where the harasser insists on sexual favors in exchange for benefits associated with their position within an organization. In essence, an individual participating in this form of harassment would proposition an employee for sexual favors in exchange for favorable reports, recommendations, credentials, promotions, job security, or any performance-based opportunity.

• One-of-the-gang Harassment- The harassment occurs when a group of men or women make lewd comments or offer unwanted sexual attention to another individual.

• In the United States, the Civil Rights Act of 1964 directly prohibits employment discrimination based on sex, race, color, national origin or religion. Although the law was initially intended to combat sexual harassment of female employees, the prohibition of sexual discrimination covers both males and females.

• Victims of sexual harassment have a number of legal options including: mediation and direct litigation in the form of a personal suit. Victims of sexual harassment must file a claim under the particular state’s (where the discrimination took place) Fair Employment Practices statute. Through this statute, the individual will file a common law tort, which will initiate a financial reimbursement or legal action against the party who partook in the discriminatory action. As a result of the varying definitions and circumstances which enshroud sexual harassment, the settlements and the cases themselves will vary greatly. That being said, any instance where an individual is exploited or treated in an unjust or unwanted sexual manner can legally take action against the perpetrator.